Where to Buy the Impossible Burger

Vegan burgers typically conjure images of dried bean patties and chunks of vegetables – but not anymore.  The Impossible Burger has recently become king of the vegan burger world, but finding it has proven, well, nearly impossible especially given the recent shortage of the meatless burger the food service industry experienced.

You might wonder what the hype is about – it’s not often people are breaking down the door for a burger made of vegetables, and yet, more and more venues are adding this as a staple burger to their menu, almost bragging once they’re able to serve it up.  And that’s fair,  because it’s not too far off to say the Impossible Burger has become the Krabby Patty of our times. As you might guess, the Impossible Foods research & development team is in no hurry to let go of their official burger making process and currently, you can’t walk into a grocery store and buy the non-meat burger patty for yourself, or to serve up to customers.

That said, you’re not out of luck.  We can’t serve the burger up on a bun to guests for you, but Food Service Direct can ship you a bulk box of Impossible Burger!

Is it worth it?  Well you’ll have to be the judge for yourself, but we’ll tell you this, Impossible Foods just revealed the Impossible Burger 2.0  at the Consumer Electronics Show (CES).  It’s a new iteration of the non-meat burger that that is made of soy and potato protein, and tastes like beef.  Along with being a meat alternative, the 2.0 version of the burger is also gluten-free, has fewer calories than its predecessor.

Some folks attribute the alt-burger’s success to its makeup of potato, coconut wheat and heme.  Heme, or sometimes called “haem” is an iron-rich compound that is abundant in animal muscle typically. In patty form, the burger cooks and tastes like real beef without the unwanted cholesterol, hormones or antibiotics. And that’s not all – according to Impossible Foods, the maker of the Impossible Burger, producing this meat-free delight “uses a small fraction of the land and water resources and emits vastly fewer greenhouse gas emissions.”  So basically, this burger has come to save the world. 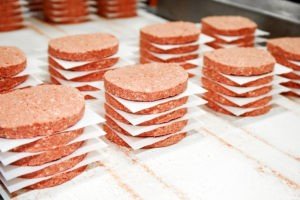 What’s next?  In a recent interview with The Spoon about the Impossible Burger 2.0 – the company’s CEO hinted that Impossible Foods is also working on a non-meat steak.  We can’t wait to try it, and we’ll be sure to tell you if we stock it!

* Please note: Current regulations of this item mandate that only food service operators are permitted to purchase this product. Validation of purchase for food service is required and order may be cancelled if validation is not able to be determined.

Pride is more than a month. It can be a fight to be yourself, in your skin, in your identity, every day. We see that at Food Service Direct. In many careers, it can feel like a secret you have to keep, in order to succeed. We don't think it should be that way. In fact, w...

Rappers & Ballers in the Restaurant Industry

Ever hear that saying, “rappers want to be ball players and ball players want to be rappers?” Well, that statement holds so true that you often see these figures dabbling in their counterpart’s field. Professional athletes like Iman Shumpert and Damian Lillard are always...

Celebrities are usually people who make frequent public appearances whether on a TV screen, a silver screen, or at public events such as sport games, premieres, or press conferences. While the majority of celebrities do such things, some of them have also decided to open...

When you think of a cafe, your mind might instantly picture a Starbucks or a small local coffee shop that sells a variety of lattes and pastries. However, not all cafes around the world are filled with lo-fi music and the sounds of coffee brewing. In South Korea, there a...